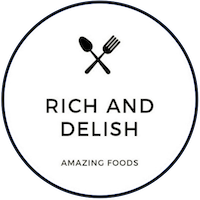 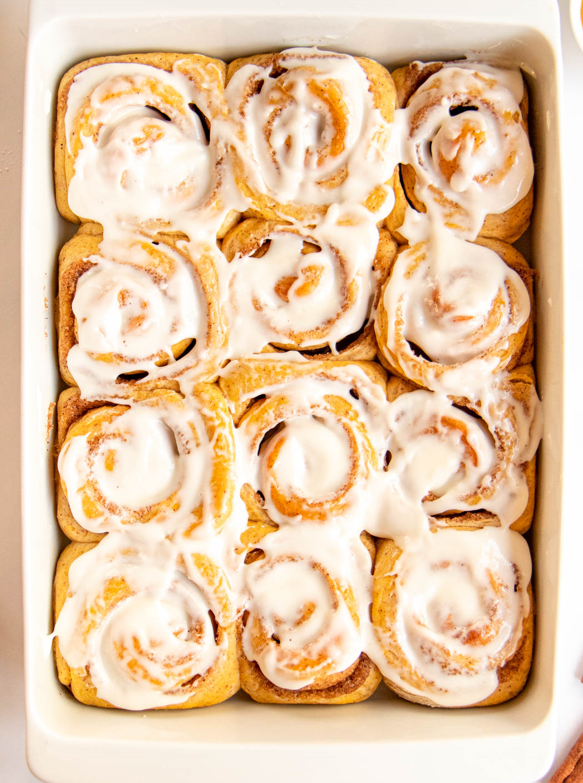 These pumpkin cinnamon rolls are melt in your mouth soft, made with pumpkin puree and fall spices in the dough, filled with cinnamon filling, and topped with maple cream cheese icing. These are a dream! 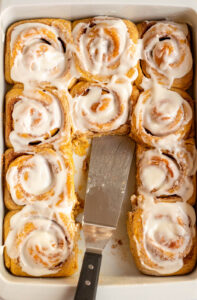 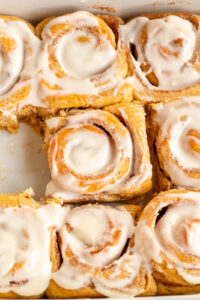 Watch our video for how to make pumpkin cinnamon rolls: 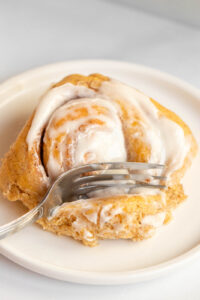 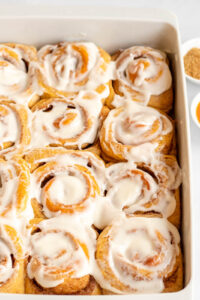 Flour– we used all-purpose flour for this recipe, bread flour will work as well.

Yeast- we used instant yeast for this recipe. make sure that your yeast isn’t expired.

Sugar- we used granulated sugar for this recipe. You can use caster sugar as well.

Brown sugar- adds a caramelly flavor to the muffins.

Cinnamon- we love adding cinnamon to pumpkin-flavored desserts, it adds so much flavor that compliments the pumpkin flavor.


Ginger- use ground ginger for this recipe. You can add any of your favorite fall spices like cloves, allspice, and pumpkin spice.

Nutmeg- use either ground nutmeg or fresh nutmeg in this recipe.

Egg- you will need 1 large egg for this recipe. Make sure that you use room-temperature eggs in this recipe.

Kosher salt- you will need 1 tsp of kosher salt for this recipe.

Milk- use whole milk in this recipe. you will need 3/4 a cup. 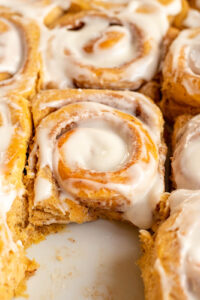 For the cinnamon filling:

Soften butter– leave the butter in room temperate for 1 hour, or until it softens.

Brown sugar– we like using light brown sugar for the filling.

Cinnamon– You will need 1 tbsp of ground cinnamon for the filling.

Nutmeg(optional)- you will need 1/2 tsp of nutmeg. use either freshly grated nutmeg or ground nutmeg.

Cream cheese– you will need to get your cream cheese to room temperature. 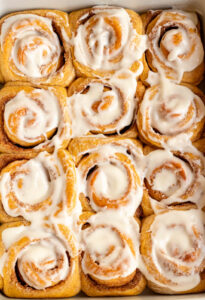 These pumpkin cinnamon rolls are: 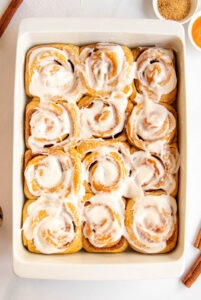 How to make pumpkin cinnamon rolls:

In a bowl of a stand mixer, add the flour, dry yeast, brown sugar, granulated sugar, cinnamon, ginger, and nutmeg. Mix with a spoon until combined. Add the salt, and mix until combined.

Increase the speed to medium and mix for at least 8 minutes or until the dough is smooth and silky.

Cover the bowl with plastic wrap and let the dough rise at room temperature for 1-2 hours or until it’s doubled in size (or even tripled in size).

Punch down the dough down and transfer it to a clean floured surface. Sprinkle flour generously on the dough and roll it into a 1/4 inch thick rectangle, making sure that the bottom of the dough doesn’t stick to the surface. 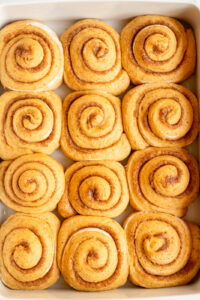 Make the cinnamon filling: In a medium mixing bowl, add the room temperature butter (soft to the touch), brown sugar, cinnamon, and nutmeg. Mix until creamy and combined.

Spread an even layer of the cinnamon filling on the dough and cut off the sides (creating a rectangle).

Cut the dough into 12 equal strips (as seen in the video) and roll each strip into a roll. Place the rolls in a lightly greased baking pan, cover with a towel and let the rolls rise until doubled in size.

Remove the towel, and bake the pumpkin cinnamon rolls in a 180c (350f) oven for 15-17 minutes or until the tops of the rolls are a bit browned. 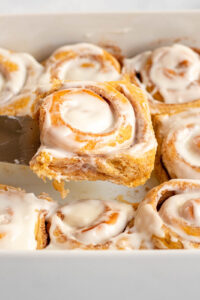 Make the glaze: In a medium-sized bowl, add the softened cream cheese, softened butter, powder sugar, vanilla extract, and maple syrup. Mix with a spoon or a tiny whisk until creamy and smooth. 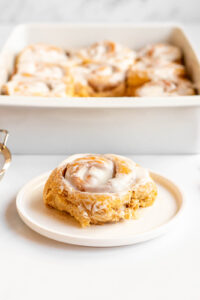 Tips for this recipe: 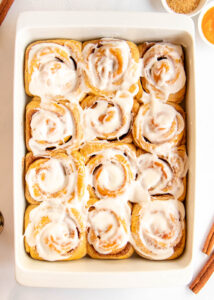 How to store these pumpkin cinnamon rolls?

It’s okay to store these pumpkin cinnamon rolls at room temperature if they are not frosted. Make sure that you store the rolls in an airtight container so they won’t dry out. The maple cream cheese frosting contains cream cheese which needs to be refrigerated.

How to get clean cuts in cinnamon rolls?

There are two ways to get clean cuts in cinnamon rolls.

The first method is to roll the dough into a roll and place it in the freezer for 15 minutes. Then using a serrated knife, mark 12 cuts on the dough, and once you’re happy with the size of the cuts, cut them carefully. The only disadvantage in this method is that when the dough is cold, it takes longer to rise.


The second method is to roll the dough into a roll and let it cool in the fridge for 10 minutes, to help the dough and the filling to firm up, and cut the dough into 12 rolls using an unflavored dental floss. This method is very popular and we like to use it often!

The third and our favorite method (as seen in the video), is to spread the cinnamon filling on the dough, then cut off the edges with a pizza cutter, then mark 12 rolls with either a knife or with the pizza cutter, and cut 12 strips. Then we roll each strip into a roll, and this step ensures that you have clean rolls with no filling smearing on the dough. 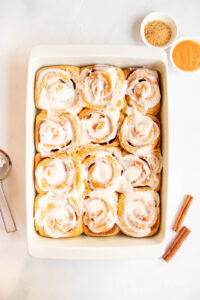 How long will these pumpkin cinnamon rolls last?

These pumpkin cinnamon rolls will last for up to 5 days stored in an airtight container in the fridge, or up to 4 days stored at room temperature unfrosted.

Do I need a stand mixer to make these?

You can knead the dough by hand! Start by mixing the ingredients in a big mixing bowl, then transfer the dough into a clean floured surface and knead the dough for at least 10 minutes, or until the dough is super smooth and elastic. 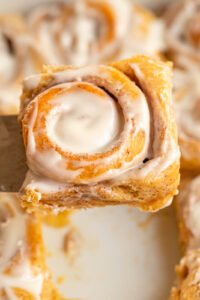 What temperature should the milk be?

The milk should be warm to the touch. We suggest using whole milk for this recipe. If you warm up your milk too much, it can kill the yeast, so either use room temperature milk or measure the temperature of the milk with a thermometer, it shouldn’t go past 100f.

Can I make these overnight pumpkin cinnamon rolls?

After you rolled and cut your cinnamon pumpkin rolls and place them into your baking pan, cover them with plastic wrap, and place them in the fridge. The next day, remove them from the fridge and let them come to room temperature (for about an hour) before baking.

How to reheat cinnamon rolls?

Place the cinnamon rolls on a plate and reheat in the microwave for 20 seconds, these warm-up great and taste amazing for 4 days. 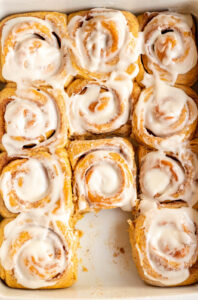 Can I make this recipe dairy-free?

Yes! it’s easy to make this recipe dairy-free. Simply replace the whole milk with almond milk or any of your favorite vegan milk.

Can I freeze the pumpkin muffins?

Yes, you can freeze these pumpkin muffins after they cooled completely in an airtight freezer-friendly container for up to 3 months, some people find the cupcake tastes better after freezing it.

What flour do you use for these pumpkin cinnamon rolls?

We use all-purpose flour for these muffins. Bread flour will work great as well.

Pumpkin bread- Our homemade pumpkin bread, made with fresh pumpkin, and fall spices gets you a moist and soft melt in your mouth pumpkin bread.

If you tried this pumpkin cinnamon rolls recipe, don’t forget to leave a rating and a comment below. We love hearing from you.

If you liked this pumpkin cinnamon rolls recipe:

For the dough: For the filling: For the glaze: Instructions:

Thank you for dropping by!
Our blog is all about simple and delicious recipes. We’re showing you step by step how to make our favorite recipes. Visit our social media for more content! 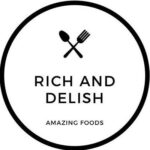 Search Through Our Recipes

This website uses cookies to improve your experience while you navigate through the website. Out of these, the cookies that are categorized as necessary are stored on your browser as they are essential for the working of basic functionalities of the website. We also use third-party cookies that help us analyze and understand how you use this website. These cookies will be stored in your browser only with your consent. You also have the option to opt-out of these cookies. But opting out of some of these cookies may affect your browsing experience.
Necessary Always Enabled
Necessary cookies are absolutely essential for the website to function properly. This category only includes cookies that ensures basic functionalities and security features of the website. These cookies do not store any personal information.
Non-necessary
Any cookies that may not be particularly necessary for the website to function and is used specifically to collect user personal data via analytics, ads, other embedded contents are termed as non-necessary cookies. It is mandatory to procure user consent prior to running these cookies on your website.
SAVE & ACCEPT